Surrounded by your glory

What will my heart feel

Will I dance for you Jesus

Or in awe of you be still

Will I stand in your presence

Or to my knees will I fall

Will I sing hallelujah

Will I be able to speak at all

I can only imagine

I can only imagine

These lyrics are from a song by Mercy Me, a popular evangelical music band. When I myself was a non-denominational Christian I knew these lyrics well, and often we would use it for worship music in church. Since converting to Catholicism I haven’t listened to music like this in a while, but as I was preparing this article, this specific song came to mind.

This song, I Can Only Imagine, is about being in the presence, the very face of God. It contemplates the impossible majesty one must be confronted by when they are finally able to see God’s presence directly in heaven. There is a strong conflict for the singer as he contemplates a strong pull towards multiple, appropriate, responses. Which would he do? It’s an answer as mysterious as God’s face itself.

One answer might be to think about the Disciples. They were in the presence of Christ, saw the very face of God, and how did they react? Another answer can come from a good Catholic. You see, this sort of song wouldn’t likely come from a Catholic, because while they would still contemplate the direct light of God in heaven (read: St. Thomas Aquinas), they have something of an idea about what it is like to be in the presence of God.

Today, Sunday, March 15th, 2020, the pandemic of the novel Coronavirus (COVID-19) is at large in the United States. What we are doing now, which itself is perhaps novel, is an attempt to act in a preemptive way by stemming off the spread of this disease on the front end. We’re trying to cut it off before it becomes too drastically serious. Schools are closed (duh, because schools are western society’s infection breeding houses), gatherings of a certain number or above are prohibited or strongly discouraged, and social distancing is encouraged practice. This affects, naturally, religious institutions as much as any others. Churches are faced with the decision of staying open or closing, wondering what their place is. Do they stay open as a way to foster faith and hope or do they close for fear of catalyzing the spread of the novel Coronavirus?

The secular response is obviously that churches should close immediately. Any maintaining of an open church where many people come is a prime opportunity for the disease to spread. But the Christian faithful know there is something more at stake here than our physical well-being. We know that there is a huge significance to place of church within ours and others’ lives. We all have a ready acknowledgement of our own mortality and know that coming to understand and being closer to God is more important than any relatively earthly struggle.

Now, in my old non-denominational setting there is something to be said about the value of learning together, singing to honor God, and being close to your community members. So much hope comes from living in community with others and being close to God through them. As much, I do not discredit the value of such a gathering, but I must say that Catholics do not gather just for these things; there is a more central element that Catholics gather around.

In the documents produced by the Second Vatican Council, it was emphasized that the Eucharist is the “source and summit” of the Catholic Faith. You see, Catholics believe something quite miraculous and absurd in the context of modern thought. The world sees what is in front of it and considers not much further than that, but Catholics see something deeper. Of course, I must present the caveat that when I talk about “Catholics” believing this, I’m talking about what a surprisingly small amount of Catholics and the official documents of the Church profess. In a recent Pew Study it was found that a mere third of U.S. Catholics actually believe  one of the most central Catholic teachings.

All Christians practice communion, where each week or every so often they eat bread and wine (or grape juice) as a commemorative act that recalls the Last Supper. For most Christians, and for two thirds of “Catholics,” this is a symbolic act. It is representative of Christ’s sacrifice and we eat it to remember what He did for us. Except what one third of Catholics believe, and what the Catholic Church teaches, is that this is not a symbolic measure. It is literal. Literally…what? The bread and wine are not symbols of Christ’s body and blood, they literally are the body and blood of Christ.

That’s why a Catholic isn’t likely to sing or have come up with a song like I Can Only Imagine. In a great many respects, Catholics don’t really have to imagine. Every time a Catholic goes to Mass, the presence of Christ is real and right in front of them. Even more than that, the Catholics profess a wild claim that they must eat Christ in the form of bread and drink Christ in the form of wine. What other religion professes such a wild claim as that of eating their deity?

This belief is not rooted in nonsense, either. Let’s look at the Gospel of St. John, Chapter 6. In the original Greek, Christ tells his disciples that they must chew him, chew him in the way that animals eat, not in the way that humans may daintily consume a delicacy. This chewing consumption of the very body of Christ is a necessary path to salvation, says the Lord:

“The Jews were arguing among themselves, “How can this man give us flesh to eat?” So Jesus replied, “Truly, I say to you, if you do not eat the flesh of the Son of Man and drink His blood, you have no life in you. The one who eats my flesh and drinks my blood lives with eternal life and I will raise him up on the last day. My flesh is really food and my blood is drink. Those who eat my flesh and drink my blood, live in me, and I in them. Just as the Father, who is life, sent me and I have life from the Father, so whoever eats me will have life from me. This is the bread which came from heaven; unlike that of your ancestors, who ate and later died. Those who eat this bread will live forever” (St. John, Ch. 6 Vs. 52-58). 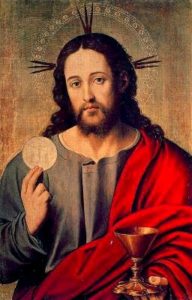 So the consumption of the Eucharist, bread and wine turned into the very body and blood of Christ, through the power of Christ via the institution of the Church and her priests, is no casual affair for the Catholic. For this reason there is an extra emphasis on the value of the Eucharist and going to Mass during a time of pandemic. In some ways it is absurd to ask a Catholic to casually give up going to Mass because you are asking him to refrain from seeing the miracle of Christ’s most tangible presence on earth. The Eucharist, the most regularly recurring miracle in the world, is the very heartbeat of the Church and it is the very heartbeat of the Catholic.

It is allowed, of course, that Catholics miss Mass. In times such as these when the threat of disease is so high, our Bishops are cancelling Masses. Large gatherings still present a threat of extending a pandemic. NPR and others are casually reporting on these affairs as well as what other religions are doing for their regular weekly gatherings, and while they have gotten better at using Church terminology to refer to things like the Eucharist, they still treat it as some sort of alien practice that has no inherent significance. But it is no casual affair – it is the most important affair.

“What? You’re still having Church? They didn’t cancel? Why would you risk going to Church?”

Because it’s not just church – it is the Mass. Further, it is the Eucharist, our Lord Himself. When push comes to shove I will respect my society and community, staying home when appropriate, but in no way will I diminish the value of Mass and the Eucharist. Its value and the consequences of its consumption are way more important than these earthly affairs of ours, and it will always come first. While I yet imagine what being in the presence of God is like, for now I will live in the presence of the Eucharist, the presence of Christ until He comes again, as much as I can. Should it be imposed, I will obey and stay home from the Mass, but the priority of my life is Christ, because whether it is COVID-19 or not, Christ is what I plan on seeking.

For an extra resource on this topic, listen here (part 1) and here (part 2) to a talk by Bishop Robert Barron (one of my heroes).