It’s funny how everything comes back to philosophical questions. There can be an assumption, at times, that philosophy is only for the far off and unimportant nerds. Really, though, philosophy underlies everything we do. It is a description of who and what we are, why we function, why we exist. Here, specifically, I am going to explore how philosophy is relevant to human intelligence.

So, first, I begin with a question. Is everyone equal? Society tells us that. Our country says that. Religions say that. It is, ultimately, a true statement. But in what ways exactly are we equal? For example, are all humans equal in intelligence? Postmodern philosophy (or epistemology, if you like) suggests that everyone is equal as much as Christian philosophy and theology does, as much as common sense suggests as well. Postmoderns, though, explain human equality differently than other philosophies. More specifically, they react to the notion of equality in different ways than other philosophies.

More or less, Postmodern philosophy suggests that all humans are equal in value and that all humans, more or less, have the same abilities and rights. They attribute the wild diversity of specific people to a combination of nature and nurture. Certain biological factors and certain environmental factors collide to create the unique experience of any one human person. All people are alike at the most basic level of their humanity, but they are victims to a chaotic world that subjects them to a number of (mostly unwanted) experiences, forcing us to change and become more and more unique. For the Postmodern, life is violent and gloomy. When it comes to intelligence, specifically, Postmoderns would view all humans as being capable of the same level of intelligence, but would attribute the result state of intelligence to whatever worldly factors produced that person.

Now, keep in mind that intelligence here does not mean ‘knowledge,’ per se. Intelligence means, here, more of a notion of ‘ability to reason.’ You might not know the constructive details of a car, but you are really great at conflict resolution for your friends. You might not know how a rocket works, but you can describe the complex organic chemistry of an animal’s body and how to fix a broken organ.

The idea of viewing all people as being capable for the same intelligence but not being in a resultative state of that exact intelligence is a notion shared by Christians, as well. God made everyone equal in value and potentiality, but how we are actually manifestly present in ourselves makes us different from other people. But these two groups of people do not assume the same explanation for how people come to have different intelligences. In the Christian mindset there is an idea of free will, an idea that has plagued many modern philosophers (but not older ones, necessarily). Postmoderns view people as complete victims of their experiences, but Christians view people as reactive agents that have power to choose their own lives.

How do these differences matter? So what if there are different reasons behind the matter? They both agree that all people are equal in their capacity for intelligence!

The ends do not justify the means.

You see, let’s take this seemingly abstract philosophy to a real field of consequence: schools. How our administrations understand ideas of equality will wildly shape their implementation of school policies. What our government officials deem necessary for school will depend on these ideas, too.  Do we think children are complete victims of their experience or do we think that they are active agents and have a role in how they turn out as adults?

I would argue, currently, that much of school administration across the country assumes the prior, that children are essentially complete victims of their experiences. They see children as not having any control over what happens to them, and think about their own pasts as children as being controlled by external events that mattered to them. Part of our nation’s discussion around systemic racism is centered in the postmodern mindset, that African American children are entirely victims of their circumstances. The Postmodern reaction to the issues of systemic racism and systemic education is that we need to flood peoples’ lives with opportunities. If enough opportunities are provided then people who are disadvantaged will use those opportunities to pull themselves out of their situation. It’s just a matter of providing the overabundant amount of opportunities.

But here we must acknowledge, in Postmodern thought, a fallacy around free will. The fallacy is that ‘if opportunity is provided to subject y, then subject y will be super grateful and seize that opportunity. But this fallacy, this assumption about the human experience, is false. A person’s desire to seize an opportunity is anything but guaranteed. And here what might change is not just a matter of circumstances, but the simple desire on the part of the person to either seize or not to seize.

So what does this have to do with intelligence? Well first, let’s begin with the idea that everyone is equal in their capacity for intelligence.  Generally everyone agrees with this statement. There are some obvious exceptions, like biological and mental impairments, where the rule of capacity is ruled out, but, more or less, people are capable. Intelligence is also not something that you are delivered on a silver platter when you’re a baby. Intelligence has to grow over time.

How, then, does intelligence grow over time? Like a plant? No, of course not. It grows through experiences of a person. As someone experiences and lives through reality, their intelligence can grow from those situations. But intelligence is not guaranteed. In all instances of an opportunity for intelligence to grow, people have to choose their reaction to whatever their situations are. If a person chooses, they can accept the education presented before them or they can reject it.

Over the course of time these choices (which might be something like 35,000 a day), affect the overall growth of intelligence. A fallacy that Postmoderns make, and therefore something like what our school systems make, is that choice is not important when it comes to understanding someone. When we think about students, for example, we do not as much consider what the role of willpower has when it comes to education.

Teacher: “Man, all my kids bombed the test.”

Admin: “Well how did you teach your lesson? Did you present the material in a fun and engaging enough way? Did you make sure that all 30 of your students were paying attention to you for 100% of your class?”

Let’s think about a situation. Let’s gather, in our minds, a large group of people (not necessarily students) who have the same level of intelligence. For the sake of a standardization element, even a terrible one, let’s use the notion of IQ. This large group of people, say 100, all have a high intelligence. They are all at home and they’re just living their lives. You present all 100 people with the option of: reading a philosophy book, reading a romance book, watching a movie, or taking a nap. Each of these things affects intelligence in a different way. Arguably a philosophy book (a good one, anyway) challenges the intellect the most and a nap most definitely does not (while maybe everything else lies somewhere in between). Are all 100 really intelligent people going to choose the thing that increases their intelligence the most? No! Why would they? Because they have a choice!

Even in a situation in the modern classroom we find this same struggle. I present a group of 30 students with a task, to work on vocabulary recognition with a technique called Columns (a modified version of flash cards). This opportunity presents students with a really great way to study class content. But there are a multiplicity of choices on the students’ part with how to react to the material. They can do it all the way, following all of my seemingly arbitrary guidelines, they can do part of it, they can do the bare minimum and do it totally against the rules, or they can just opt out (I’ve seen all of these reactions, if you can’t tell). The students choices on how to react to the assignment affect their intelligence and affect their education. I did my part as a teacher: it’s graded work, it’s relevant to what we’re learning, I gave them plenty of time in class, etc. But how they choose to react is on them. 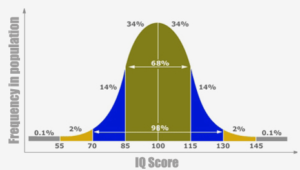 It’s almost like we were already aware of these facts…

The Postmodern reaction is, essentiallly, to push aside this curve of standard deviation, and to forget the participation of the person on the opposite side of the opportunities. Again, you just have to get enough opportunities out there and then everyone will be taken care of. In fact, just as admin asks the teacher “Well what did you do so that everyone failed?” the assumption is that opportunities have to be forced on the disadvantaged.

When it comes to education, for example, we have to force students to take up the opportunity for education so that they can be raised to a relatively equal level of intelligence. Except by doing this they are inherently putting aside the extremely valuable notion of free will!

In St. John Henry Cardinal Newman’s work Grammar of Assent, he expounds on the delectable saying:

“A man convinced against his will
Is of the same opinion still.”

His exposition around this saying relies on the fact that even though you could possibly provide the most convincing logical argument, or (in a school setting) set up the most materially motivating principles for completing study with integrity, you are not going to receive an organic and natural result. Your own results are an artifice for your own gain at the end of a short time (if even that), but not earning any long term benefit for anyone.

In short, it is well to assume equal capacity for intelligence. It’s never too late for someone to learn anything. But it is absolutely right to assume inequality of intelligence in a population, simply because human beings have free will. It is not right to assume which person has lower or higher intelligence just because you don’t like them, but it is absolutely true that people with lower and higher intellects exist. It is also entirely fair to expect that in a situation like a classroom, not all students are going to excel in education and be intelligent.

Instead of falsely pretending that all people will excel in education, let’s presume that some people just aren’t going to make it that far. Not everyone needs to get a full high school education. We can help people become fully productive members of society without that much education. But liberal education is also good, and those who can should go as far in their education as is possible. Access to apprenticeships should be way easier, and students should have access to starting them sooner. We also should learn, as a society, to be accommodating to such an idea as varied intellects. People who don’t get as much education as someone else shouldn’t make less money arbitrarily. Especially if they go through an apprenticeship and become really skilled at a certain task, but even if they aren’t necessarily skilled, a person shouldn’t have to worry about feeding their family. Inasmuch, they shouldn’t be shamed because of choosing a professional apprenticeship instead of carrying on with a high school or university education. They’re still people, and valuable people at that.

We are a singular race of people with the power of free will, of making choices, no matter how hard the consequences might be. I think we can act like it, too.