The topic of Artificial Intelligence (A.I., or Æ if you’re Grimes) is a difficult one. There are many layers to the subject matter, partially because of how far technology has already come with regards the matter. It’s easy to talk about Time Travel as some far off and different technology, totally unachievable by science, because there’s nothing in our modern time that even closely resembles it. In this year of 2020, though, we have plenty of supposed evidence that indicates that the arrival of a technology such as A.I. is imminent.

Ever since the dawn of computers, living technology as Artificial Intelligence has been at the fore of the human mind. Think Data from Star Trek, Skynet from Terminator, Ultron and Jarvis from the Marvel universes, the T.A.R.D.I.S in Doctor Who, and so many more. As soon as the study of neurology exposed and equated the seemingly simple function of the firing of neurons to electronic circuitry, the concept of Artificial Intelligence was easily made a prediction of the near-future. How can A.I. be created? It’s a matter of catching up with evolution. We have to figure out how to make efficient enough technology that coordinates together in a similar way to the human brain, and boom, we’ll have it. 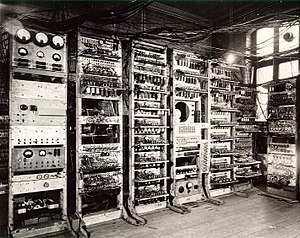 Of course when your computer needs a whole small bedroom to fit in, there might not seem to be much hope for the future of Artificial Intelligence. This, of course, until we see the rapid development of efficiency in computer technology. The rapid development of efficiency is seen with Moore’s Law, which “is the observation that the number of transistors on integrated circuits doubles approximately every two years.”

With such a prediction of efficiency, it seems to make sense that at some point, Artificial Intelligence is all but inevitable. It should be no wonder that the human brain will be made to be inefficient, even, at some point in the future (if not already).

Thinking about this year 2020, we have already seen a lot of success in the field of A.I. IBM’s Watson was solidly invented in 2010 (but Watson’s capability has dramatically increased since then). Siri is another great and obvious example, along with all of the imitations thereafter, such as Cortana (named in honor of the honored Halo character) and Samsung’s Bixby. Even other styles of A.I., such as search engines, are huge. Duolingo’s whole program is based on Machine Learning technology (A.I. technology not necessarily purposed for direct two-way human interaction). Machine Learning is technology designed to ‘think’ for itself, adapting itself when encountering new data.

These technologies have their limitations, of course. There is so much left to be desired before Siri adapts herself into Skynet, and Cortana is in many respects lacking compared to her namesake. Watson can beat someone at Jeopardy, but couldn’t engage in a rhetorical debate.

As you may have guessed, by reading my last two articles, the normal assumption that I suspect out of society is ‘well science will figure it out eventually’ and my retort is that ‘science never will.’

This is an impossible modern possibility: we will never be able to create a truly ‘intelligent’ artifice.

Again, you might ask: “Now Robert you aren’t a scientist, how could you possibly know that we won’t ever be able to do this?”

The answer here, the answer for my first IMP, and the answer forever after, is that when we analyze the notion of A.I., we are using qualitatively different questions and modes of thinking than what you normally might assume. Instead of assuming, for example, that human existence is a complex composition of neurons and other biological components, I assume here that humans are a complex interplay of immaterial as well as material components. You can see those arguments here. If you haven’t already read up on those arguments, make sure you do before carrying on too much farther.

When understanding Aristotelian forms and how they manifest in the real world, we logically understand that some forms are more noble than others, by virtue of the fact that they contain other forms virtually, in a metaphysically simple fashion. Humans have a lot of moving parts, but these parts are not entirely indistinguishable from other parts. Their existence largely depends on the rest of what resides with the human body. The Aristotelian form of ‘human’ virtually contains the form of ‘heart’ and ‘lungs’ and ‘spine’ not like one form acting as a bucket holding a bunch of other individual forms, but as one giant seamless form.

In this tradition of teleology, human artifacts, like coffee pots, are not afforded a similar hierarchical position of nobility as trees, for example. The form of a coffee pot is regarded as a ‘composite’ form while trees and humans are regarded as a ‘simple’ form. This is because the forms contained by the form of coffee pot (heating element, on/off switch/ piping/ pot/ etc.) are all separately existing forms that cooperate together to accomplish a greater task. While human organs can technically be transplanted, humans were not originally built like a coffee pot, with all of the pieces starting out as entirely completed individual parts. Coffee pots, by design, did start out this way. If one part of the coffee pot breaks then it can be replaced with a new part, fixing it up just the way that it was put together in the first place.

Think of an orchestra, for example. The orchestra is composed of many cooperating units. For the time that all of the units cooperate together, they work together as a singular movement. Once they are finished, they break apart into their normal individual selves and the concert of their effort is complete. Ultimately we can say that humans are capable of crafting new immaterial forms, but only by adapting physical material, and by coordinating that physical material with other physical material.

A key element of human intelligence is the ‘intellect,’ an immaterial aspect of the human form, or soul. It’s main ability rests in abstraction, taking elements from the real world and re-shaping itself to imitate and understand them. The largest, and hugest, obstacle to re-creating Artificial Intelligence lies here, in the nature of the intellect. Furthermore, the intellect is paired with the ‘will,’ another virtual component of the human soul. The intellect itself even virtually contains two aspects – the passive and the active intellect.

This is a huge deal when it comes to talking about A.I. Our current technology does wonders with imitating our material abilities, like speaking, but no technology, not even Watson, understands. Further, the technology does not reason. No technology abstracts immaterial reality, contemplates what that immaterial reality is, and, as Aquinas says of the intellect, composes and divides these immaterial forms. It cannot ever ask, by itself and without direction, “What is that? Of what is that? How is that? For what is that?” Children, you see, do this without any direction from us and without having been taught to (although we certainly teach them how to do it better as they get older).

Necessarily, too, if the nature of the intellect and other aspects of the human form relating to intelligence and existence are immaterial things, we find a huge disconnect between our ability to create a coffee pot and our ability to know. We can modify a coffee pot and create other physical components (that have forms with them) but we have no way to create purely immaterial things.

Any human artifice, no matter how many organic synapses it replicates with electronic ones, can achieve the seamless and simple nature of the human intellect and will. Beyond that, no human artifice can create these immaterial forms. At best, human artifices can imitate them by creating individual material components that mimic something like the activities within, but as our creative abilities lie with modifying physical reality, and the nature of the intellect and will are immaterial, then we are forever at an impasse. Humans will never be able to create Artificial Intelligence.

Of course, I would be remiss if I failed to mention that there is one and only one specific way that humans are actually capable of creating immaterial forms – by having children.